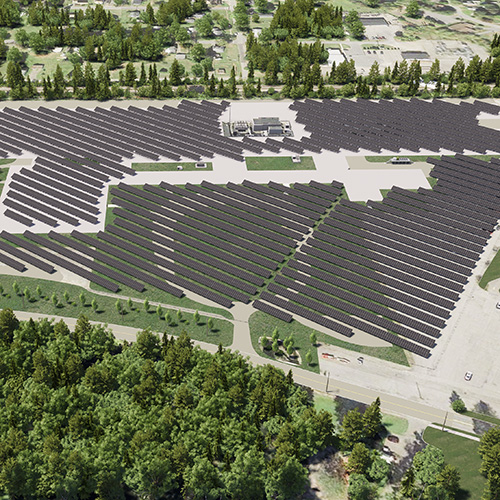 Amphenol Aerospace completed a multi-million-dollar solar farm at our former facility’s site, which is now the largest solar farm project in New York State.  The installation covers nearly 23 acres and utilizes over 18,000 solar modules to produce an estimated 7,540 MWh of power per year. In addition, Amphenol’s parts were used in as many of the electrical components as possible, including the inverters that convert the solar DC electricity to AC currents. Power generated by the solar farm will provide the grid with the energy equivalent of 800 homes annually, promoting the stability of the region’s electrical supply and, in turn, Amphenol’s manufacturing operations.

Catastrophic flooding in 2006 and 2011 disrupted our business, upended the lives of our employees and many of their families and neighbors and resulted in tens of millions of dollars in damages to Amphenol Aerospace’s manufacturing facilities in Sidney, New York. Following the flooding, Amphenol sought a long-term solution to reduce the risk of flooding at the site. While many companies would have established manufacturing operations elsewhere, Amphenol’s long-standing relationship with the community and knowledge that closing the facility would damage the local economy pushed us to find a solution that would allow us to stay. Working closely with local, state and federal governments, Amphenol designed and built a new 307,000 square foot state-of-the-art manufacturing facility down the road and up the hill from our former site and in the process retained all of the more than 1,000 jobs in Sidney.